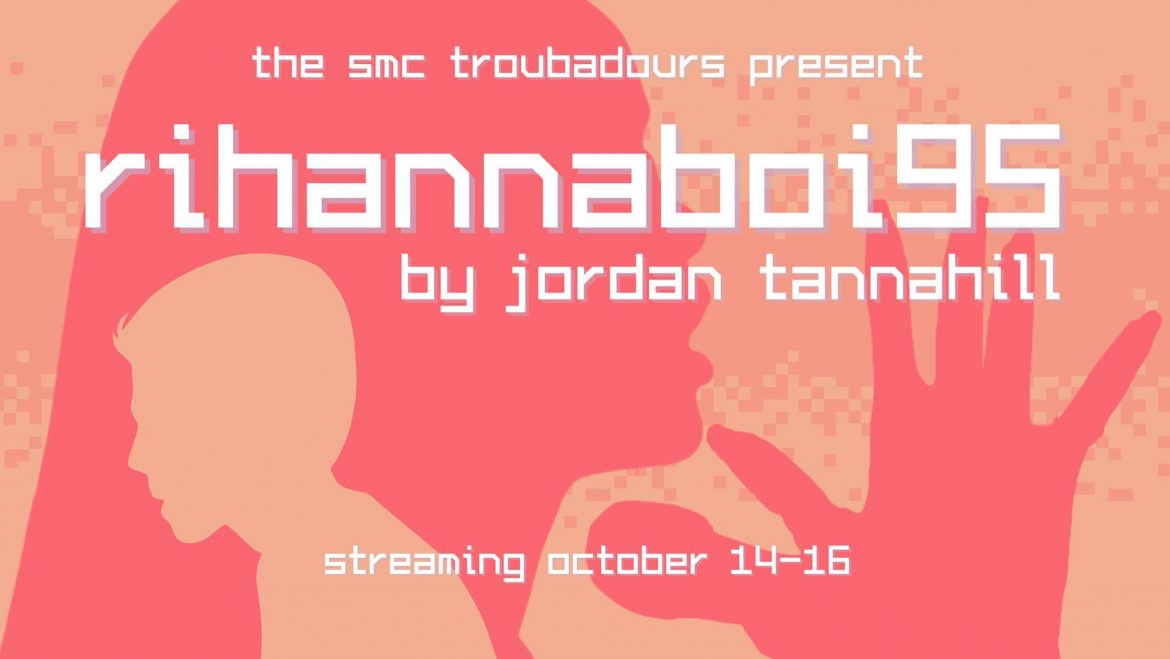 The SMC Troubadors take on an online medium

From October 14-16th, the SMC Troubadors put on an adaptation of Jordan Tannahill’s 2013 production rihannaboi95. Each night, the play consistently began with a clip from Rihanna’s music video, “Bitch Better Have My Money.” After the short section, a nervous Sunny greets his online audience with a tense “Hi YouTube.” Randy Chang plays Sunny, the sole protagonist, in a grounded and familiar way, with parts of a straining need to be seen and heard shining through – much like the YouTube landscape back in 2013. The production consists of a roughly one-hour-long monologue as Sunny delivers his story, navigating the dichotomy of speaking to an unseen audience and the danger of his current situation as he reveals the stakes through his narrative-driven account. While certain aspects of the script and portrayal hinder the online format rather than utilizing it, this production does well in portraying a window into a complicated place of both insecurity and self-discovery as it leads the audience through the narrator’s account of his experiences with bigotry and homophobia.

Throughout his monologue, Sunny holds the laptop camera, talking to it and bringing it with him around the room as he addresses his viewers. At this point, he has built up an online following from posting videos of himself dancing to Rihanna songs online. Since the Troubadours deliver this production through a YouTube livestream, the line between stage and audience constantly fluctuates between the foreground and the background. On one hand, Sunny speaks to an unresponsive audience: people who are aware of his history and part of his narrative. On the other hand, Sunny speaks to the viewer outside of his narrative, watching from  their respective screens. Both begin to mould together in an incorporated illusion, but the change in how we interact with YouTube and live streams nowadays, compared to how things were in 2013, breaks it jarringly. The audience member has to be aware that this is a window into a time period, rather than a moment in the present date – and at times, this may cause confusion. At certain parts, Chang wavers in his momentum with the monologue. The picture of Sunny as a scared teenager talking to a world of anonymous judges can be lost, and the divide between audience and narrative gets too large at times. Chang’s emotional delivery holds up in authenticity, however, and it’s easy to return to the focus of the story.

Overall, this play conveys a relatable truth. The strongest parts of this production are by far Chang’s performance of Rihanna’s songs, directed by the movement director/choreographer, Dhayana Dass. From his first sequence of “Umbrella” to his final scene with “Where Have You Been,” Chang captures what it feels like (for LGBTQ+ youth or otherwise) to lean into your truth and face an uncertain world – with direct and unflinching courage.