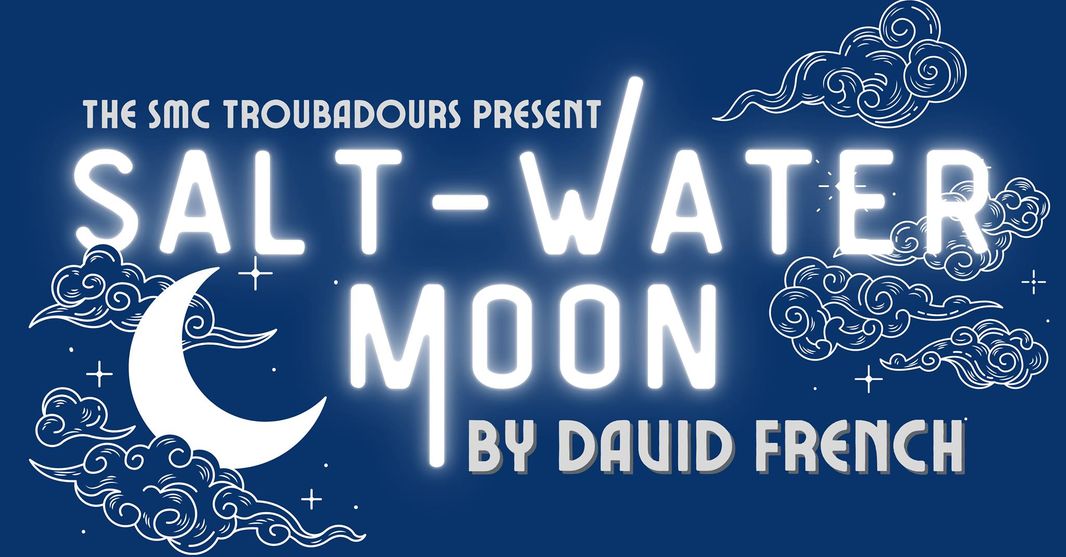 A gentle return to live theatre

By Dylan Coley, The Mike Contributor

It’s been about five months since the SMC Troubadour’s last show, a virtual edition of the SMC Funnies. It’s been even longer since their last in-person production of Guys and Dolls. Now, at long last, they’ve returned to the (outdoor) stage with their rendition of David French’s Salt-Water Moon.

Taking place entirely on a front porch in Coley’s Point, Nova Scotia, (a fact I found delightful, if only because my last name is Coley and I am a narcissist), the play details the rocky reunion of former lovers Mary (played by the talented Mai-Yin Johnston) and Jacob (played by the charismatic Sina Sasanifard) as they rehash their grudges, discuss their traumas and try to figure out how to move forward after a year spent living entirely separate lives.

If you like big, bombastic, story-driven plays, Salt-Water Moon probably wouldn’t be down your alley. The show is essentially one long conversation between two people who love each other despite spending a year apart. Despite the small-scale nature of the play, I do think it was an overall positive return to live performance for the Troubadours.

Simple but effective staging out on a lawn in St. Michael’s College sets the scene for their conversation (a conversation which frequently drifts into arguing, letting the actors show their abilities as their characters run the gamut of emotions) and the understated atmosphere really lets the performances shine.

Indisputably my favourite part of this play was the music. The original score by student composer Shreya Jha is expertly utilized and adds a whole new layer to the play. Music is often an easily overlooked part of plays (except musicals of course); yet, the music itself and the way it was utilized definitely caught my attention and drew me into the play all the more.

For all my so-far positive review (and don’t get me wrong, I really do have nearly nothing bad to say) I would be remiss to exclude the one aspect of the play that I found, not necessarily bad, but more unnecessary. That being the narrator (played by Anna-Maria Maleshev). She was probably my least favourite part of the show, but that by no means reflects on her performance, rather it is simply a place where I feel the script itself fell short. However, the Troubadours actually did an admirable job of using the narrator in some interesting ways and there were parts where I did appreciate her. So while the narrator felt largely underwhelming, she certainly wasn’t cause for me to dislike the entire play.

The Troubadours’ next show will sadly not be in person, but their virtual production of rhiannaboy95 by Jordan Tannahill will be streaming live on October 14th-16th. And judging by the quality of this play, I would certainly recommend checking it out. If you cannot make their virtual show, I highly recommend getting a ticket to whatever their next in-person production may be. I know I’ll certainly be looking forward to it.