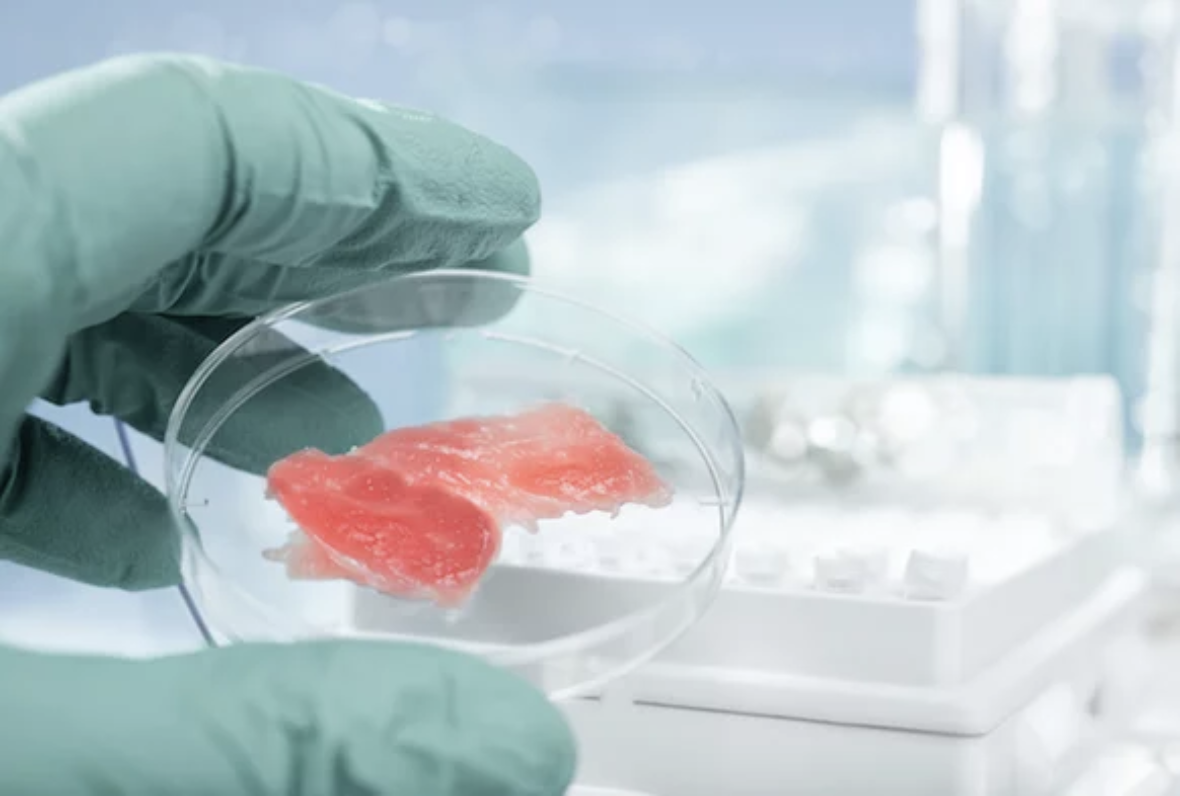 The future of lab-grown meat

Does meat taste good? Many people say it does. Yet, most people are unaware that meat production is very environmentally unfriendly. Many of the animals that we get meat from, such as cattle and sheep, belong to the animal family of Bovidae. They are herbivores and are characterized by their ability to ruminate. Rumination is a process in which the animals chew their food (mainly plants) coarsely at first, then ferment the food in their stomachs before regurgitating the fermented ingesta (known as cud) to be chewed again. That is why ruminant animals normally have four components in their stomachs: the first two are the fermentation chambers and the last two are the digestion chambers. Fermentation of plants in the first two chambers is done by bacteria, and this produces methane: a greenhouse gas that traps heat even more than carbon dioxide. That is why scientists now propose that, besides the emission of carbon dioxide by industries, the emission of methane by intensive animal farming also contributes to global warming. Furthermore, farming animals is a very energy intensive process. This is because animals require far more crops (as feed) to produce limited amounts of meat. Scientists calculate that if a field is used for growing crops, it can feed 10 people. But, when it is used to grow animal feed, the meat which the animal produces can only feed one person. As the world population has exploded in the last century, the demand for meat also has increased, leading to the clearing of natural habitats to make way for meat production, thus causing significant ecological damage. Some scientists believe that in order to save the environment, alternative meat-producing methods have to be found to replace the traditional methods.

Some people believe that this alternative method is man-made meat (also known as cultured meat). Unlike traditional methods where animals have to be fed, grown, and then slaughtered, cultured meat is produced by growing stem cells of an animal in a Petri dish containing nutrients and growth hormones. Cultured meat is produced using many of the same tissue engineering techniques traditionally used in regenerative medicine. The first cultured beef burger patty was created by Dr. Mark Post at Maastricht University and was eaten at a demonstration for the press in London in August 2013.

Cultured meat has many advantages over traditional meat. First, it solves the ethical concern of many vegetarians and vegans, which is the slaughtering of animals. Many of them choose not to eat meat because of animal cruelty; but if it is cultured meat, they may be more willing to accept it. Second, cultured meat is more environmentally friendly because it does not need natural habitats such as forests and prairies to be cleared in order to produce animal feed. It also solves the problem of methane gas production by ruminant animals such as cattle and sheep, and thus alleviates the problem of global warming. Finally, with the advent of technology in the future, cultured meat can be mass produced so that even those people from developing countries can enjoy food they otherwise may have limited access to.

Of course, there are indeed many obstacles along the way for cultured meat. The first problem is that currently, the taste of cultured meat still cannot match up to the taste of the real thing. The people who have tasted it reported that it was blander and less appealing. Second, the cost of cultured meat is still quite high, even with the advancement in technology. A cultured patty still costs $11 US. Finally, and most importantly, can society really accept something that is somewhat “unnatural”? After all, when cultured meat first appeared in 2013, some immediately labelled it as “Frankenmeat.” However, given recent progress in science and technology, it seems these problems will eventually be overcome and that the future will brighten for cultured meat.